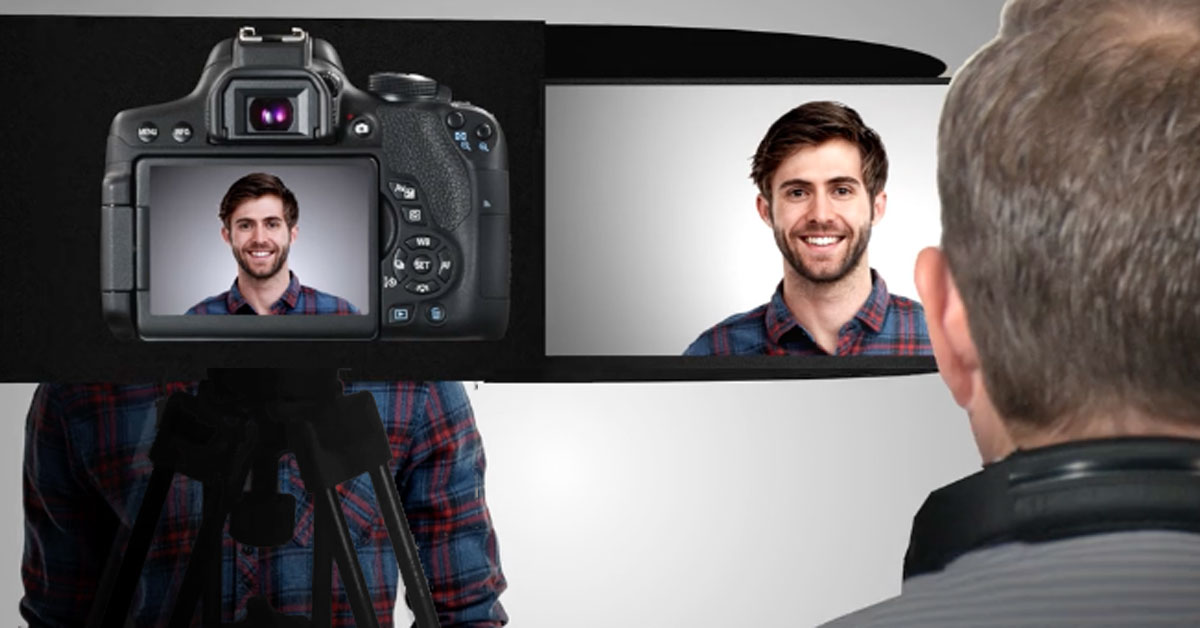 This is the EyeDirect, a sideways periscope that fits over a camera. It gets any subject to “look at” the interviewer while also looking directly at the camera.

When you’re in the same room with a customer, do you look over their shoulder?

Of course you don’t. The first rule of sales (and good manners) is to “look your customer straight in the eye.”

Of course, no one has to tell you this fact. You already know it, intuitively. It just makes sense to you from somewhere deep in your lizard brain. And this truism has probably been reinforced to you throughout your business career: Look the customer in the eye, and you’re more likely to get the sale.

Today, marketers at businesses like yours are increasingly using YouTube and other video platforms to amplify their company’s sales and marketing messages, to get their demand generation kick-started with potential leads who are searching for the company on Google or YouTube.

And of course, you’ve done your job – your company’s video offers helpful content marketing info to the customer.

But there’s a problem. A big problem. Not because your team didn’t shoot a “professional” video, or cover the right features and benefits, or make the right pitch, or had the right on-camera expert.

The problem is this: The expert was not talking to the client, because they weren’t looking directly at the camera.

Instead, they were looking off camera, at the interviewer. To the video’s audience, also know as “the customer,” their lizard brain is telling them that since this expert isn’t looking at me, they don’t care about me. This company doesn’t want to help me – they want to help whoever they were talking to off camera.

The customer then may go looking for videos that make them feel that the company does indeed care about helping them. 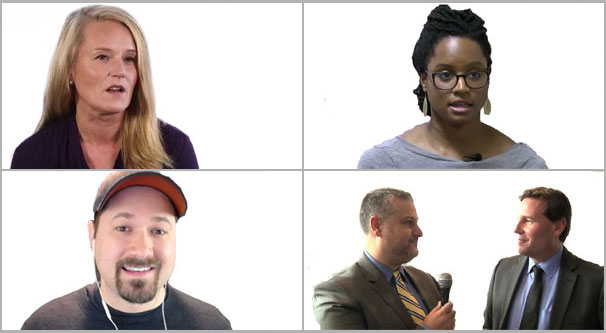 Each of these people above (except one) is looking off-camera in varying degrees. Which one do you think cares most about helping you as a customer?

Don’t worry, this problem is really nobody’s fault. It’s extremely hard for anyone to train themselves to look at the camera while they’re speaking – most business people are not news anchors. And in the TV world, the traditional news camera language says that it’s fine to have the subject looking off camera to an interviewer, or, sometimes, to have a “two-shot” of one person interviewing another.

Kill The Interviewer (But Not Literally)

But this isn’t TV. YouTube is different. In web video, people innately feel if you aren’t looking directly at them, in a tight close up (remember, 50% of users watch on tiny mobile screens), then you aren’t interested in them. Because of this, they quit watching the video after the first few seconds, likely never to return to that video or your channel. Subliminally, the customer is thinking: I am not important to this company – I’m going to find another company that cares about me.

Again, I know you and your producer, and everyone involved, has worked hard on this video. And it’s a great video – but it’s made for TV. And YouTube is not TV – it’s a different medium with different rules. It has a different language.

YouTubers know this. You can watch thousands of YouTube channels and you’ll find they always look directly at the camera, close up. It’s engaging. They’re interested in you. But business will do well if they remember that the “you” in “YouTube” isn’t really the subject of the video – it’s really the customer. Just as it is in sales.

Straight To Camera Beats 5 Degrees Off

For a long time, I was frustrated with this problem because I couldn’t find a solution to recommend to my clients. It was just too hard to get non-trained people to look at the camera. But there was no technical solution I knew of.

So I started searching. I remembered the compelling documentary “The Fog of War” (2003) by Errol Morris where he used something called the “Interrotron” to interview Robert McNamara in a way where he was looking directly at the camera. The movie won an Oscar. 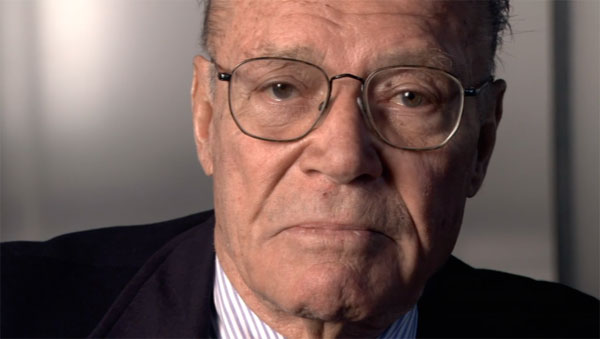 Robert McNamara in The Fog of War. Ideally your business has a more upbeat message. But you can’t argue that having someone looking at the camera is compelling. It’s like he’s speaking to you directly – it’s hard to look away.

But the Interrotron is a studio product. Could I really recommend to my clients that they take this setup on a mobile shoot to an industry conference or a branch office without using an expensive crew? No, I could not. So I kept searching.

And that’s when I found the EyeDirect. The EyeDirect is a much simpler set up, invented by longtime cameraman Steve McWilliams, who has been selling the patented device for 15 years. It’s portable, rentable, easy to install, and anyone will immediately look at the camera without training. Even kids or pets will look at the camera like pros on the first try.

Click to watch this video that shows how the EyeDirect works.

This seemed like the product I wanted to recommend. So I called McWilliams up and asked him a few questions.

“I’m a big eye-contact guy,” is one of the first things Steve McWilliams tells me.

Of course he is. He’s been working as a director and cameraman on TV commercials for a long time. And sometimes commercials call for people to look directly into the camera. Which is fine for trained actors. But much harder for kids and babies. And pets.

For situations like this, McWilliams in his early career got a reputation for constructing his own mirrored contraptions, often using empty pizza boxes and a set of mirrors, so that the subject could look “at” the human face of the cameraman (or interviewer, parent or pet owner), while also looking right down the barrel of the camera.

“I was kind of the original DIY guy,” he says. 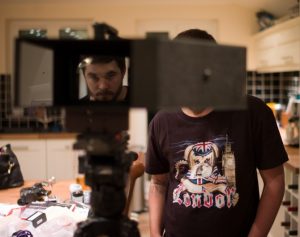 Now Anyone Will Look Right At Camera

In other words, the actor, infant, dog or cat could be convinced to look right at the camera. Which, in effect, meant they were looking the customer right in the eye. The customer, of course, was whoever was watching the commercial on TV.

Here’s an example of Facebook the company using the EyeDirect for an “It Gets Better” video:

Eye contact, McWilliams says, “is on the short list of the ways to build trust and authenticity. When you start looking at what the non-verbals are that really help you in business or first meeting or relationships, it’s always eye contact. People who look away or up in the air can be considered deceitful or telling a lie.”

Of course, that’s not the right message to be sending your customers via video, which in effect serves as a proxy for speaking to them directly in the same room.

“Those that will have authentic eye contact, you tend to trust,” McWilliams says. “It’s human nature.”

And this formula remains as true for video presentations as it does for in-person conversation, he says.

So, logically, McWilliams saw a potential market for a more fool-proof version of his pizza-box contraption. The self-described “DIY guy” built a product that any cameraman can use. It’s called the EyeDirect.

The EyeDirect is very easy to use. The interviewer and subject look at each other quite naturally through a sideways periscope hood that is fitted over the camera. The camera sits in-between and captures all the video from the subject. Speaking to the reflection of the other person is as easy as speaking to them face-to-face. The subject can hear the interviewer because they’re only feet from each other.

Audio can be captured via shotgun mic or wireless lavalier.

The system, McWilliams says, works on the first try for the untrained performer, whether they be CEOs or cats. Because the subject is responding to the facial emotions of a real person, they feel more natural and engaged. This gets passed on to the audience (also known as the customer) who is watching on video.

Personally, I find these features to be particularly exciting for YouTube use, because while you almost always need to have an interviewer, in 99% of the cases it’s more effective to not have that interviewer’s audio. It’s best just to have the subject speak directly to the camera (directly to the customer).

McWilliams has sold the EyeDirect to folks like ESPN and the BBC, the Mayo Clinic, Oprah, PBS, the University of Florida and the New York Times. And some social media companies as well.

Here’s a video in which Ken Burns is interviewed using an EyeDirect.

Today, the way YouTubers look directly into the camera is just the natural evolution of what McWilliams and some other experts have been advocating for decades. And this effect way of engaging in the most personal way can help businesses as well.

Online video, he says, is now speaking the language of the selfie.

“You want that selfie,” he says. “You want that person who gets to view that picture to see your most intimate presentation. If I’m trying to sell my product, I don’t really want to sell it to the guy in the room and let you be a voyeur to that conversation. I want to sell it directly [to you].”

With the EyeDirect, subjects don’t even have a chance to be camera shy, McWilliams says, because they don’t even see the camera. It feels like they’re looking at the interviewer. They often ask “Where’s the camera?”

I have no business relationship with McWilliams or EyeDirect, but I hope he sells even more of these units to producers of YouTube videos for business. I will be recommending it.

I would argue that eye contact is a human necessity,” McWilliams says. “You put a blindfold on somebody and it’s terrifying; somebody ignores you in the elevator and it’s dismissive.”

“What are we doing with media, if not trying to connect with each other?”

You can buy the Mark II model for around $1,400, which is for professional cameras. And there’s also one that’s $1,000, the Folding Mark E model, that weighs just 10 lbs. and folds up into a backpack. The Folding Mark E is better for many corporate YouTube videos because it fits DSLR and prosumer cameras, and is light enough to be used on a monopod or even handheld.

Here are directions on how to assemble the EyeDirect Folding Mark E:

Here’s an example of a video promo for a school, where young children, teens, parents, and educators each address the viewer directly. It’s very compelling, even if you’ve never heard of the school.

You can also rent the EyeDirect – I found listings for anywhere from $100 to $250/day. You can rent them in San Francisco, New York, Miami or elsewhere. You can also have them shipped.