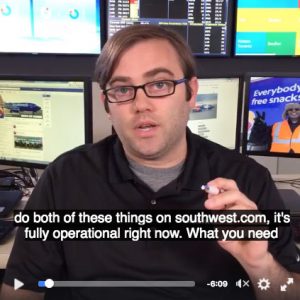 Recently, amidst a major public relations and overall business crisis with cancelled flights and major technical issues, Southwest Airlines took the world, via Facebook Live, into their “listening center” at the company’s headquarters in Dallas. Certainly they also included many other factors in their approach, from standard social media, traditional PR, customer service operators and more. But from a social media, social video, public relations, and overall media perspective the Facebook Live approach is interesting for many reasons. It shows how companies can use live streaming video, integrated with social media, to address an ongoing crisis. But there is room for improvement as well.

Update From Our Chief Operating Officer

We were live earlier discussing our technology challenges. What you'll find in the stream: – Rebooking information- Current state of our Operation- What caused yesterday's outage- System recovery

Let’s look at the key factors in Southwest Airlines’ approach:

This gives us an insider’s look into what the “listening center” looks like for a major corporation. There are at least five full-time staffers and a heck of a lot of monitors tracking what’s being said about the company across social media. Clearly there are a lot of questions, and certainly a lot of upset customers, but the problems.

They used Facebook Live, a very immediate form of communication, to give an update on the situation. The social media team leader who let the video interviewed the company’s chief operating officer and gave us the very latest.

This circumvents the traditional news cycle. We all know that one people love to do is tweet about a plane being late or being stuck in an airport. Now those same tweeters can both link to this video that speaks to the problem, and also instead of hearing about it from the USA Today website, people can go directly to Southwest’s Facebook page and hear more about it direct from the company.

4) Talk To The Camera

You’ll notice that those on camera don’t speak to each other. The look directly at the camera and speak to the customer. This gives us a feeling that they are talking directly to us, the customer, and that they care about our well-being. If they’re looking away at the interviewer, it makes us feel like they don’t care about us. 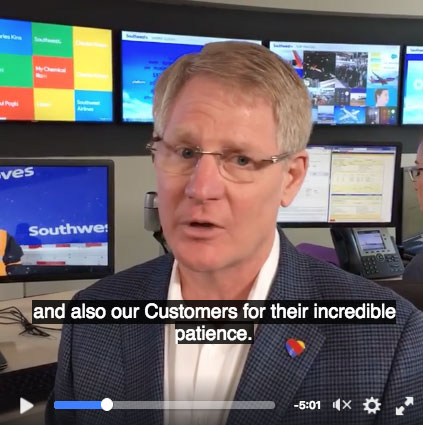 Here’s Southwest’s chief operating officer Mike Van de Ven. Even though he’s being interviewed, he turns and speaks to the camera directly, in effect speaking directly to his customers. We feel he is concerned and earnest.

Facebook video begins by playing silently. Either the Southwest team or the Facebook software added captions, so that people who watched this after it had been originally broadcast were able to see the text of the message with the sound off. By clicking on the video on mobile the user opts in to the sound and the captions disappear.

Quite likely the video, after it was live, was converted to a paid ad so that many more people who follow Southwest on Facebook can see the video, other than the normal two percent or so of followers who get to see it organically.

There were tremendous amounts of comments. I’m sure Southwest has dozens more social media people than we saw on the video and is responding as soon as possible in as many ways possible on as many platforms as possible. You can see in the comments that some people are pleased with Southwest’s response.

This video gave us a very visible impression that something was being done. We heard from the company’s COO, and we saw that there are people trying to respond to our concerns via social media. Of course there are many, many others who work in the company’s customer service.

Bonus: Other Steps They Could Have Taken

This is a great video. Right now you can’t easily simulcast to Facebook Live and YouTube live, but if I were Southwest I would download this video off Facebook and upload it to their YouTube channel. They did so for Twitter but not for YouTube. Why is this important? Because YouTube videos are embedded into Google search. When I look search for “Southwest problem” in Google search, I see news articles about the problem. When I select the “videos” tab in Google search, I see news articles about the problem. Southwest could solve this by uploading this live video to their YouTube channel, which would make it come up on the first Google search page. Then they would also want to respond to customer service comments on the video within YouTube comments. And they should put links back to their social media within the description of the video. The title of the video should be something like: “Southwest is working to solve outage problems.”

Some Examples Of Southwest’s Google Search Problem For The Crisis 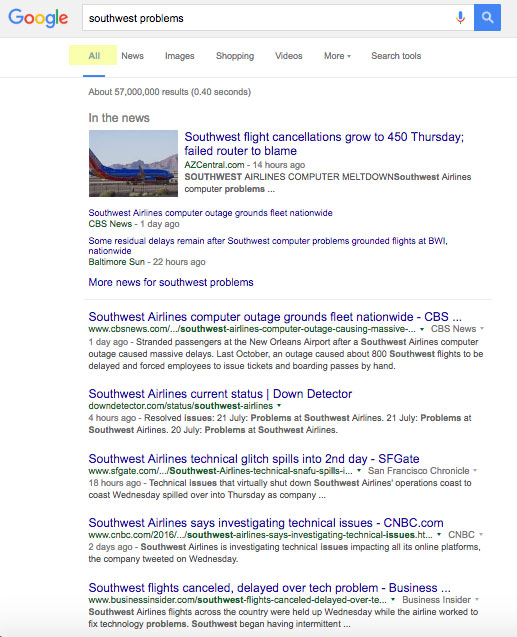 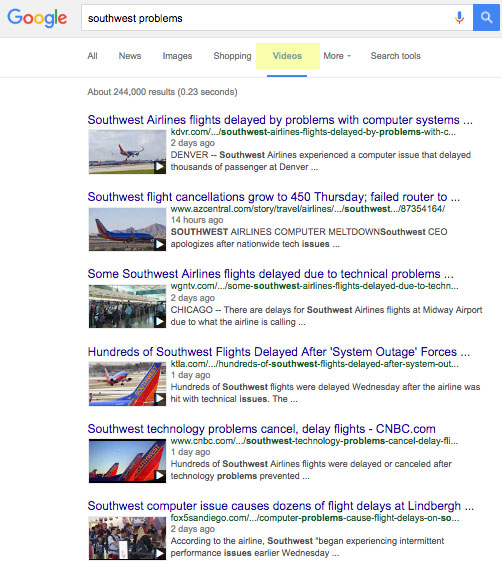 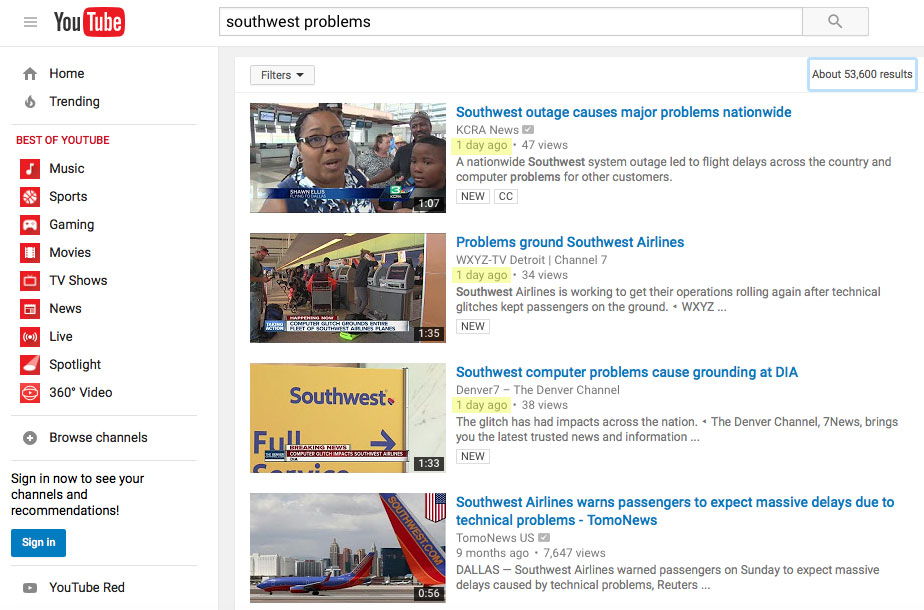 Here are the top searches for “Southwest problems” on YouTube. You’ll notice that they are all current and have very few views. This is deceptively telling you that people are not searching for answers to the Southwest problems on YouTube, which would be incorrect. In fact they’re looking for official news on Google, where YouTube results are embedded. Since they don’t find a good YouTube result, they move on to look the unofficial text-based reports of news outlets. Southwest could circumvent the news cycle by reposting their Facebook Live video to YouTube, where it would get many thousands of views due to being found in the Google search engine. This would help their crisis management.

Do you have questions about how to use social video to deal with your company’s crisis management. Click the Contact button or ask in the comments.