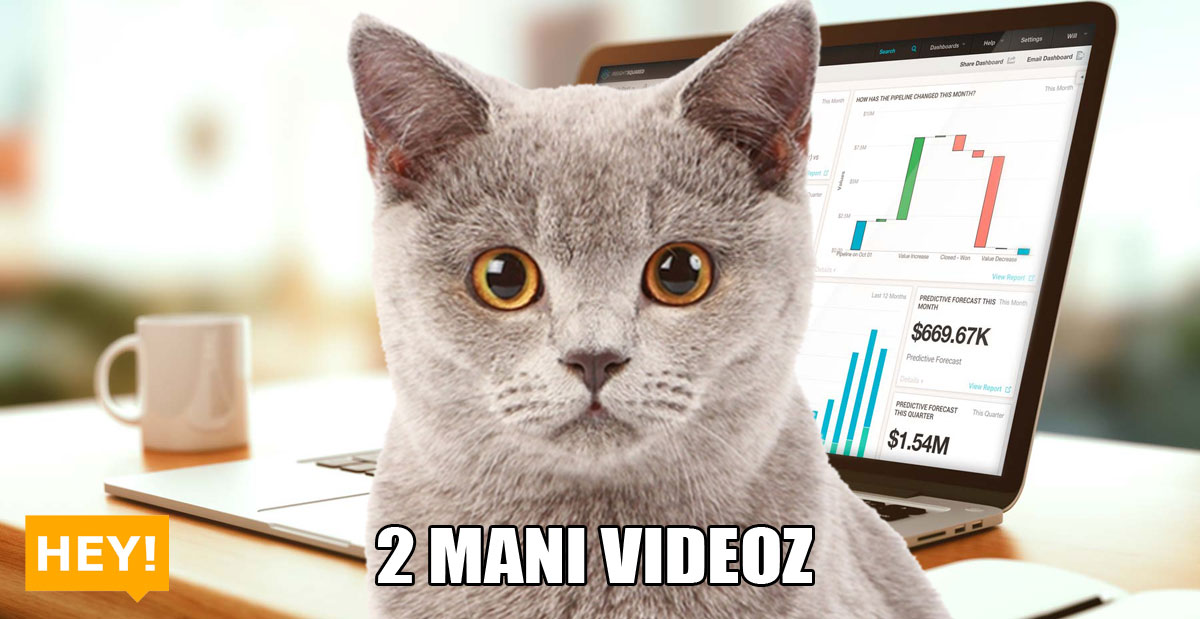 I’ve seen this happen on YouTube more times than I can count, usually on the YouTube channels of B2B software or hardware or SaaS companies based in the Silicon Valley. The videos are getting extremely low viewcounts, due to a unique reason: The marketing team is posting too many videos on a given day.

It’s ironic because the problem is a result of companies doing too much with their channels, rather than too little.

By launching more than one YouTube video on a given day, marketers are killing the traffic for not just those individual videos, but also their entire YouTube channel as a whole. This is not a commonly known problem, so I’ll explain the key causes, challenges and solutions of this problem below.

Have you been posting more and more videos, but your channel gets less and less views? Have you heard the upper levels of management say something like “We’ve tried YouTube and it doesn’t work.”

Well, YouTube actually can work very well, but you have to use it in the way that drives the most viewership and engagement. And having the right posting schedule is one of the key factors. To see if you’re posting more than one video per day, log in to your YouTube channel and go to Creator Studio -> Videos (or click here). If you don’t have admin access to your channel, go to https://www.youtube.com/user/YourChannelName/videos, replacing YourChannelName with the name in your brand’s YouTube URL. With this process you’ll only be able to tell if there’s multiple postings over the past seven days, but you can also compare your channel with your competitor’s release schedule.

As outlined by YouTube audience guru Matt Gielen in his blog posts “7 Expert Tips: How to Get YouTube to Recommend Your Video” and “Reverse Engineering The YouTube Algorithm”, and at his VidCon presentation, the YouTube algorithm penalizes an entire channel for each video that gets viewership that is lower than average for your channel. It does this by having each succeeding video show up less and less in the suggested videos area on the right hand column (the suggested videos area is the number one traffic source for videos on the YouTube channel). If the video doesn’t show up there much, it gets watched less.

Thus, a vicious circle is created, with the initial video, plus each succeeding video on your channel, showing up less frequently everywhere else, including YouTube search and Google search. Not to be over-dramatic, but videos with lower-than-average views that you upload to your YouTube channel are a debilitating disease that can gradually silence your channel almost entirely.

If you’re a B2B company, when should you post? Well, not more than once on the same day, certainly. But you can probably expect that the best time for people to watch your video is at work. Probably the best time to post a YouTube video is the exact time you’re going to promote it on social, or in your email newsletter, or on your blog post. Videos need to be marketed just like anything else, and timing matters.

But what time do you post to Twitter, send out emails, and post to your blog? You’ve probably done the research already figured that out for your own business, either using your own analytics or industry research like this study from CoSchedule. At any rate, post your video at the same time you effect these other public messages. Here’s our video on When To Post YouTube Videos.

How Much Can Customers Watch?

Your customers have a limited amount of time to watch any video during the work day without distractions. And unless they’ve set aside for extensive training, it’s unlikely they’ll give themselves enough time to watch, for instance, an hour-long video of your recent conference panel. Also, tech workers have an internal clock where they only allow themselves to watch videos for a short period of time overall, and then only in short spurts. It’s unlikely they’ll watch more than one of your videos in a given day.

Part of the blame about multiple posting is due to what I call “The Netflix Fallacy.” Netflix has gotten a lot of attention for their maverick strategy of launching entire seasons of popular shows like “House of Cards” all on the same day. Tech folks hear that this is working fantastically for Netflix, and they’ve somehow gotten the idea that this is the way you should launch your videos on YouTube – all at the same time.

But your company is not Netflix. Your video is on a platform with billions of competing videos, while Netflix owns the platform and puts House of Cards at the top of a page visited by millions of people every day. This strategy will not be beneficial for you.

YouTube isn’t Dropbox. One of the reasons marketing folks might upload multiple videos all at once is they have not designated a specific release time for the videos. And they feel that since people can watch videos at any time, uploading all at once is just as good as on a schedule.

This is an incorrect assumption. For release schedules, YouTube acts more like a social media platform. After all, tweets or Facebook/Instagram posts can be read at any time or day of the week as well, but savvy marketers use tools like Hootsuite, Buffer, or Edgar to time their postings, knowing that business clients are more likely to read posts at certain times of the workday. The same is true for YouTube.

Moreover, when a channel manager uploads several videos at once, only the first one truly gets seen, and then only by the most avid followers of your channel. In effect, the first video squelches all the other videos uploaded that day, in effect de-prioritizing them in the YouTube algorithm in a way that they will almost never be seen by anyone, including subscribers to your channel.

If there’s an internal or external team that tends to deliver multiple videos to the social/marketing/video team at the same time, it may seem logical to upload them all when they’re delivered. This is a process that can unknowingly harm your channel’s viewership.

The production delivery problem can also be caused by the “deadline problem,” meaning it took a long time to get the videos done and now they all have to be uploaded to meet a deadline, perhaps related to an external event.

This is an unhelpful approach, because 1) with some exceptions, most people don’t look to YouTube for immediate info about either upcoming events (unless it’s a new product preview), and 2) most people don’t know about the video unless you’ve also integrated it into your email newsletter and social and website (most channels with launch timing problems aren’t doing this part properly, either), and 3) since the best YouTube content should be evergreen in nature, it takes a while to be archived and promoted within YouTube’s algorithm.

So if you’re posting something after an event, it’s better to do so on a release schedule over days or weeks. And if it’s before an event, you should do so a month or so before, not because it’s a few days before. For instance, if you wanted to launch a YouTube video about an event on Halloween, you’d want to launch the video on the first of October, not the 31st. By then the YouTube and Google algorithms will have had time to get the video properly promoted.

If you have several videos of something that’s happening today, post them to Facebook – it’s better for more immediate engagement.

Also, there’s the “archive fallacy,” the theory that YouTube should be the repository of all video content for the company in one place. This is a bad idea. If you must have an archive of content that is not going to get viewers to watch, then you should get a Wistia account or a Vimeo Pro account and host them there, embedded into a special section of your website.

For long-form training videos, the same is true. People LOVE how-to videos on YouTube, but not long ones. If people are not engaging with your long-form videos on YouTube (they probably aren’t), you may want to set up a section on your website with Vimeo or Wistia. But on YouTube, you have to break down these lessons into bite-sized units, then do a series playlist of them so people can watch in sequence.

Note: This is not to say that the content that comes out of conferences are bad, its not. Conference are extremely valuable to the attendees. However YouTube is generally the wrong platform for archiving what happened at a conference. Think of it this way: both Twitter and an ebook are text, but you wouldn’t want to publish your ebook 140 characters at a time.

By creating a content calendar and spreading out the launch of videos on your B2B channel, you can begin to train your audience of coming back every day to watch a single video. And if they’re interested, they can watch previous day’s videos. This has the additional habit of training your internal team to launch videos regularly, and trains the YouTube algorithm on how to promote your videos within the platform.

Matt Gielen talks about something called view velocity, which he defines as the amount of views and watch time a video gets in its first hours after upload. This is key to a video’s promotion within the YouTube algorithm, and the more each video is viewed on the first day it’s launched, the better succeeding videos will do on the channel.

This is why it’s key to launch the videos at the right time of day and promote them on your blog, social media, and in your email that same day, if possible.

The “But I’ve Got Too Many Videos” Problem

If you just have too many videos, and every one of them is a No. 1, must-have, absolute top priority, you may need more than one YouTube channel. Start thinking about different categories you might want to break up the channel into. Are you trying to reach different kinds of audiences with the same YouTube channel? Think about splitting them up into two or three types. But remember – YouTube channels and the videos on them are essentially permanent. You can delete them but you can’t otherwise change the videos after they’ve been made public. And you can’t change the URL of your channel. Also, splitting your audience into too many channels also has the possibility of diluting your audience, if the other methods of channel optimization are not followed. So choose wisely.

These Steps Will Help You Improve

If you are able to follow these steps to get your YouTube content calendar back on track, you will start seeing traffic gradually improve, not just on a single video, but on the channel as a whole, including all your legacy videos.

How To Get More Views Using YouTube View Velocity